If you’ve got the stomach, or perhaps more appropriately, the posterior, for it, 34 days out of Upper Fort Garry by ox-cart headed west on the Carlton Trail will land you in Fort Carlton.

Paddling mid-river glancing left and right only occasionally for possible campsites, I noticed a small, inconspicuous, orange sign on the south bank. A handful of quick strokes on the port side had me within reading distance of the sign. Fort Carlton Historic Site.  A small dirt boat launch, invisible earlier, and a dirt trail leading to a grassy flat about 60 meters square were the sign’s only neighbours. Nothing more…

Wanting to stretch his legs, Jan talked me into walking up to the trail to the grassy patch. No mean feat (no pun intended) as my standard reply to let’s take a break is ‘No. Maybe around the next bend.’ knowing full well that there is a near infinite number of bends in our future.

‘Maybe there’s  a plaque or something. Let’s check it out..’

A few meters up the trail and there’s a weather beaten plaque about steam driven paddle wheelers on the river. The  Northcote, HBC’s flagship paddle wheeler was 18 days from Grand Rapids to Fort Carlton. Crews were sent ahead of her to cut and stack wood. Pictures of of the boat and her crew.

A few steps further and there’s another plaque. This time it’s a brief primer in York  boats, HBC’s answer to the increasing demand for furs . York boats were manned by 8-10 man crews that rowed the thing as opposed to paddling. Typically 10 meters or more length overall, they drew a shade more than 2 feet and could carry 3.5 tons of cargo. Pictures of men at the oars, square sail hanging limp, and cargo in the form of HBC pieces stacked to the gunnels.

Rounding a bend on the trail as opposed to the river is reason enough to continue and wondering  aloud what kind of misery portaging a York boat must be passed for conversation. Unexpectedly a teepee heaves into sight hard on the tree line. Shocked to see anything at all, I blurt out my discovery. Jan, always a step ahead, deadpans ‘You see a teepee. I see a fort.’ 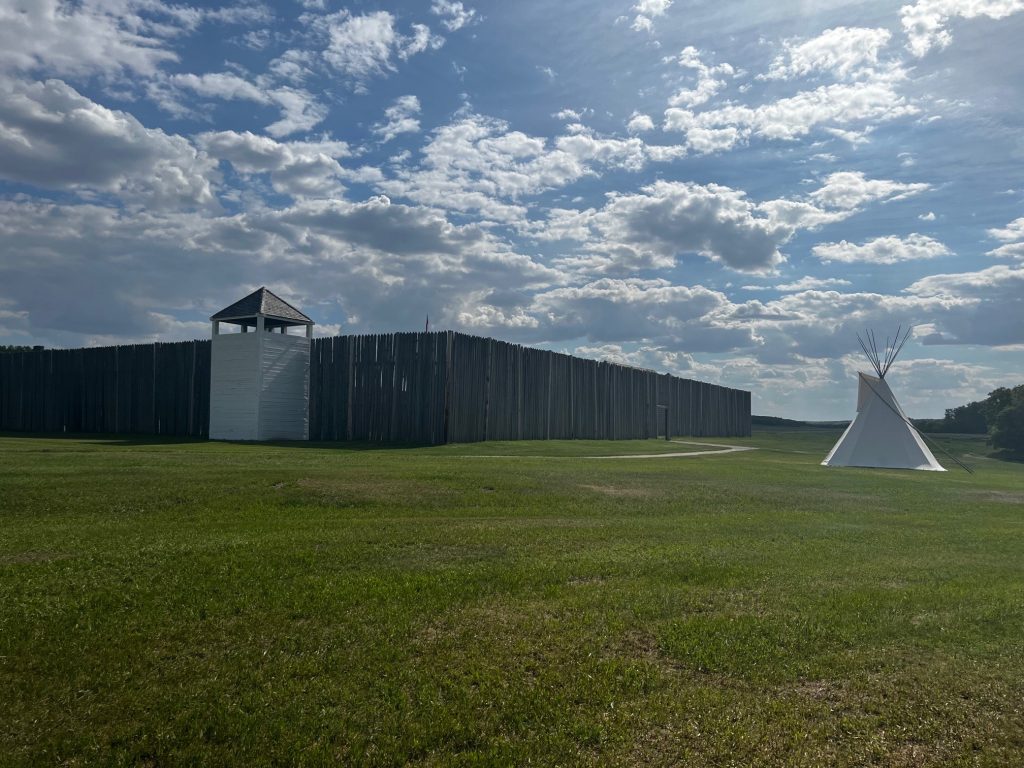 Not just any fort,  but Fort Carlton, one of hBC’s most important inland posts. And near perfectly restored to boot. 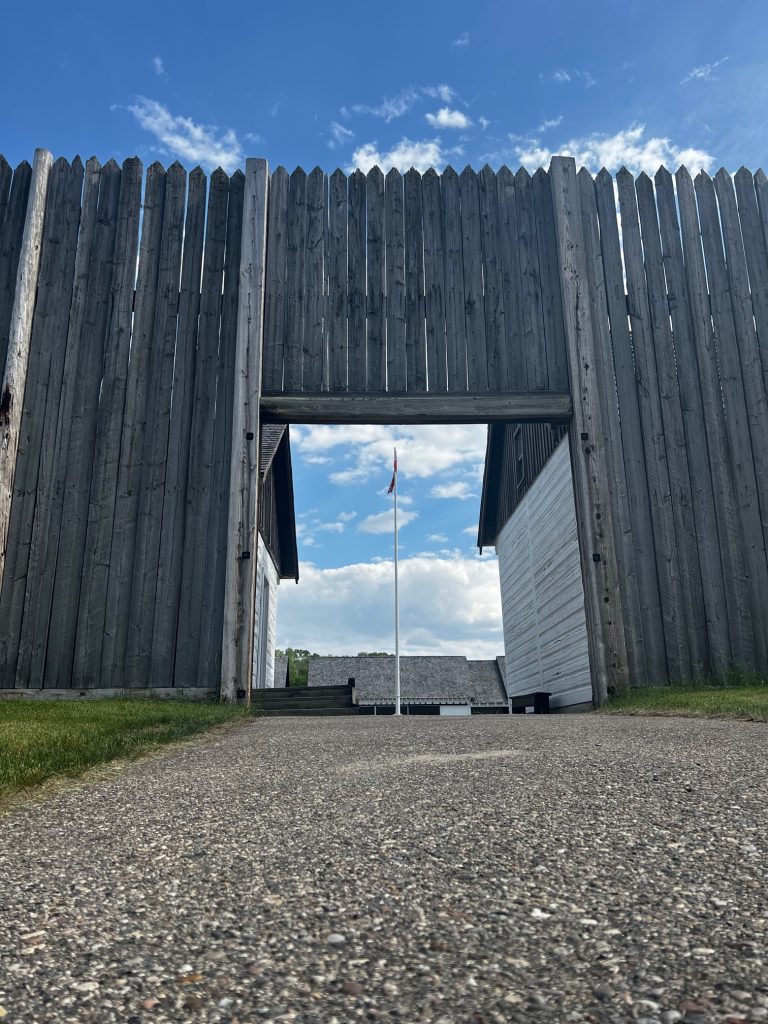 It’s not on any of the maps Jan  or I carry which means it’s not on any map you can easily find or look up.  It’s not visible from the river. It is, however, spectacular.

Ploughed over for farmland after the original fort was abandoned, the province and University of Saskatchewan have painstakingly restored the site. Palisades, catwalks and guard towers, clerks quarters, and storehouses, it’s all there. The trading post itself has everything fur from fox to ferret, bison to beaver, wolverine to wolf. There are rolls of tobacco, pipes, 35 pounds bags of lead shot and muskets. It is as close to real as one could imagine. To my mind, it’s fascinating and wonderful and amazing all wrapped in one. And Jan and I are the only ones there. 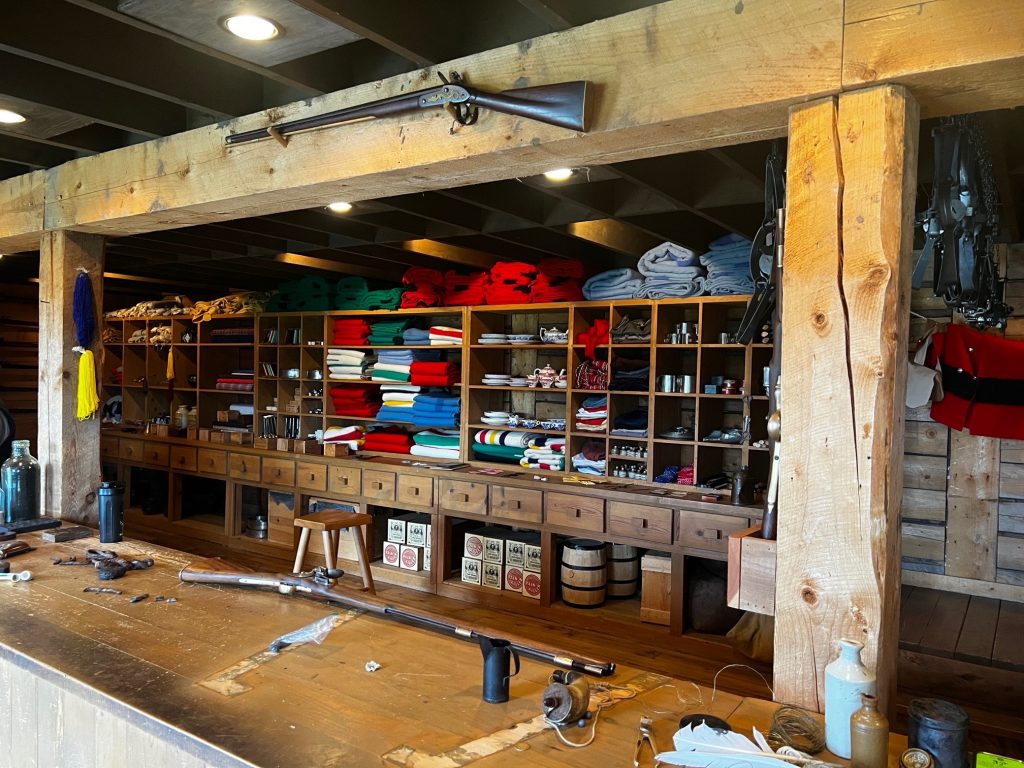 Surprisingly, very  nearly all of HBC’s  entire fleet of York boats were built here. They were sent downriver to Churchill in the spring laden with furs, destined to return with trade goods and supplies. Travel upriver from here was by canoe or, as we had earlier discovered, paddle-wheeler. More importantly, however, Treaty 6 was signed both here and at Fort Pitt, a relatively short distance downriver.

One of 11 treaties signed in good faith by First Nation’s peoples, terms of these treaties were either replaced wholesale with little to no consultation, or outright ignored by the Indian Act a few years later  thus tainting if not poisoning relations with Indigenous peoples for generations. It is a tragic, poignant reminder of governmental hubris and folly.

Tucked away in a corner of a shed away from the Fort’s other structures we find a tribute to David Thompson and his career as a fur-trader, surveyor, and geographer. I am far more pleased to see that Charlotte Small, his wife of nearly 60 years, is given her proper due. Thompson travelled more than 90,000km, criss-crossing and crossing again most of Canada from Lake Athabaska south. His wife was  with him for many tens of thousands of those kilometres and his exploits and her efforts are inexorably intertwined. One is not possible without the other. More than anything else that day, her mention warms my heart. 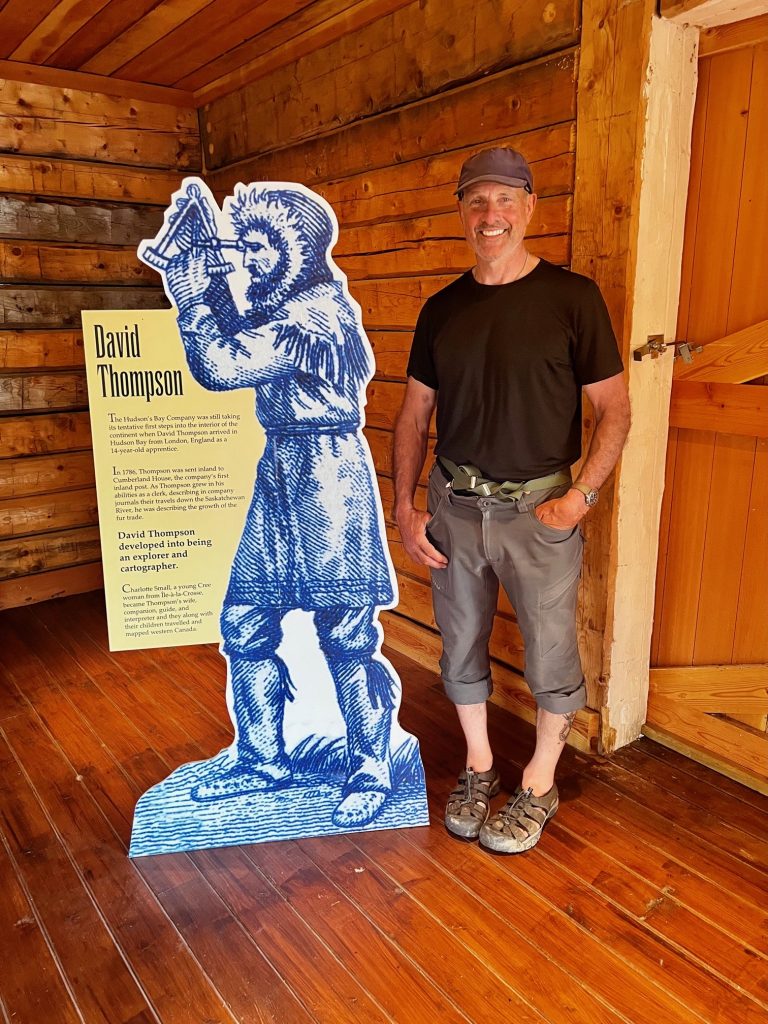 Jan, again a step ahead, remembers to sign the guest register. Like every other tourist, we dutifully plunk our names down. Under comments, just for fun, I add
‘From Vancouver by canoe’. I doubt any one bothering to read it will believe  it.