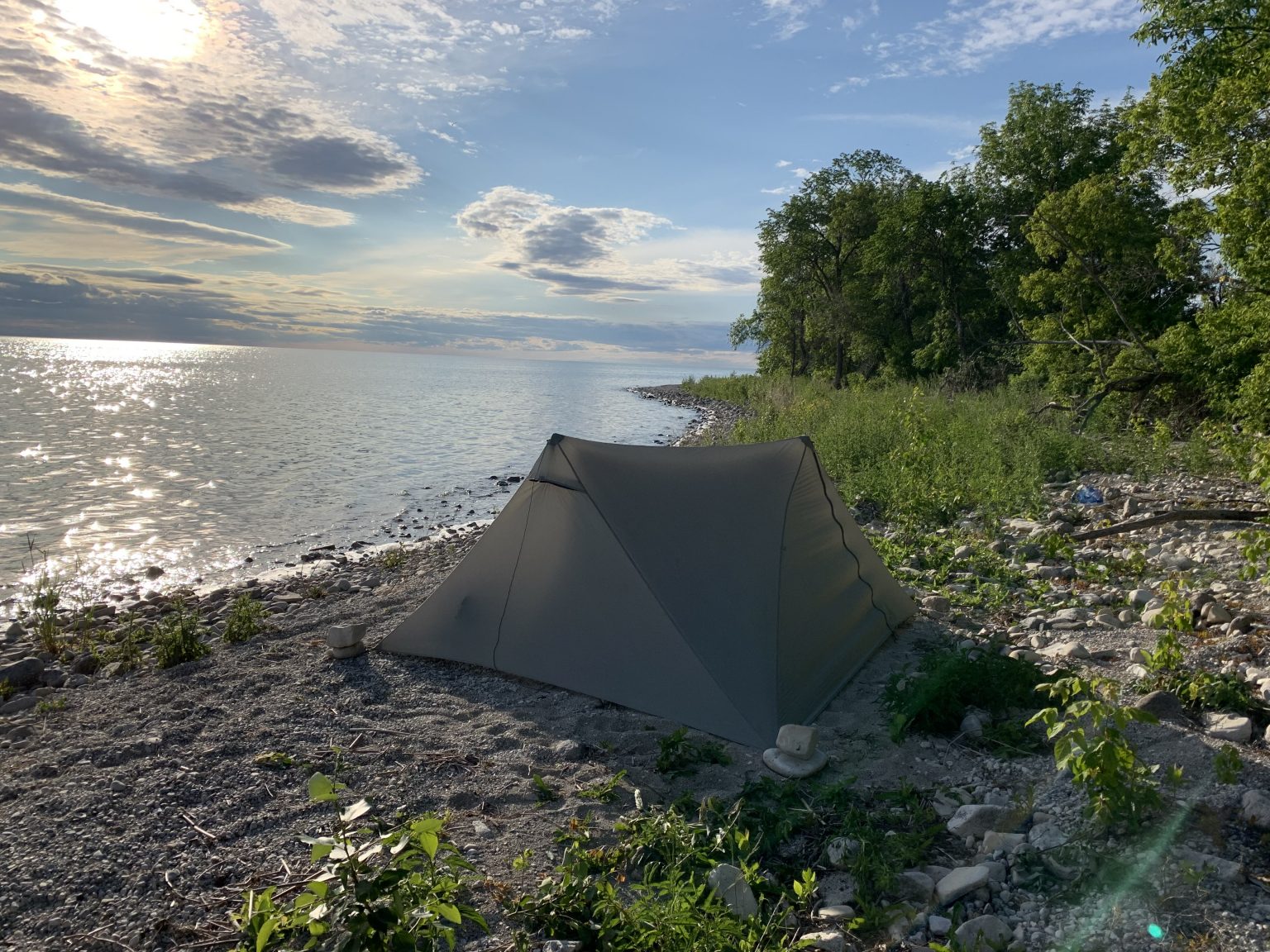 This was my campsite July 2. I was lucky to find one as I was exhausted and worried about the storm cells building in the western horizon. I figured an early start the next morning and a bit of luck would land me at Meadow Portage, the thousand year trail between Lakes Winnipegosis and Manitoba.

Try as I might, I could never do better than 2 hours between wake up and getting on the water. Turns out all I needed was a little motivation and I can assure that nothing motivates like a bear paw coming through the tent.

Bear Gryllis would have flashed out his XRT Outdoorsman Teminator (Man vs Wild Signed Edition) and deftly sliced off a couple of claws. One for a necklace and the other to sell on eBay. Or perhaps to give to the Tinder date choppering in to the set later that afternoon.

Lacking Gryllis’s panache and marketing savvy, I simply hollered for all I was worth. It might not seem like much of a response but:

It was a pre-meditated response. That is to say, Plan A in case of bear wanting inside the tent with you in it was to yell. If you’re wondering, I haven’t worked out Plan B if hollering doesn’t work. Setting off a can of bear spray inside the tent will have you wanting to be eaten by the bear just to put you out of your misery. Firing off a bear-banger will most likely start the tent on fire and draped in flaming nylon, again you would probably prefer the bear. Lastly, I don’t think I would stand a chance in hell in a knife fight with a bear in a tent.

My plan, or more precisely, my hope was to have the presence of mind to start hollering immediate-like.

I was up at 04:10 but the wind and rain that had started around midnight had not let up. Packed inside the tent and finished breakfast by 05:15, I could tell by the waves breaking on shore that there was no use leaving. I decided to nap until 6.

At 6, same story. Tent bound and waiting. 7am and  still no break in the weather. Sometime around 7:45, I hear a rustle on the tent fly. After 90+ nights in the tent I know every sound it makes. Sitting bolt upright, I see my pack has shifted in the vestibule. Camped as I was on gravel and sand, so figure some boulders-bits have shifted. I’m teaching for the zipper to get at the pack when  a rather large set of claws rips through the fly.

I start hollering ‘BEAR!’ at the top of my lungs and don’t stop. To be honest, I don’t know why I yelled bear. In hindsight, it’s kinda unoriginal. Next time, I’ll do better…

Regardless, the bear takes off pronto and I’m left staring at the gash in the tent. Unable
to stop hollering, I set a record for breaking camp
and paddling away despite the rain.

About half an hour later I notice a black shape ambling down the shore-line. ‘Of course!’ I rasp out loud, understandably hoarse. I have black bears cruise shorelines in the early mornings up and down the BC coast a number of times. My bear, and the one I had just spotted are simply doing the same thing.

Braver now that I’m in the canoe and 200 meters  off the beach, I decide it’s time for some
science. I paddle quickly but quietly until I am directly opposite bruin.

I love whistle very loudly. No response. This is
interesting because I whistle when I think bears might be around. Clearly I’m going to need a new
plan here!

I bang the side of the canoe with the paddle figuring this will surely get his or hers attention. Again, no response. Plan B might have been to bang pots but that too mighty have to be revisited.

I holler ‘BEAR!’ and the thing stops in it’s tracks and stares across the water. I can’t get it to run away, but at least I have it’s undivided attention.

Other than curiosity, I have no idea what it was interested in. I mean, I smell like a well-worn moccasin that’s been left out in the sun to dry so it must have known I was there. Perhaps it was just annoyed at having to go around the tent and me because, as you’ll notice on the picture, I was only a few feet away from the water’s edge on one side and thick bush on the other. And yes, any nearby food is carefully packed and double-sealed.

Science aside, I hope never to repeat the experience. I can assure you, the image  of the paw, complete with claws, tearing through the paper-thin fly is indelibly stamped. What I can, however, say is that if it happens to you, I heartily recommend hollering. ‘BEAR!’ seems to work just fine but feel free try something more original. Or something you think Bear Gryllis might approve of.