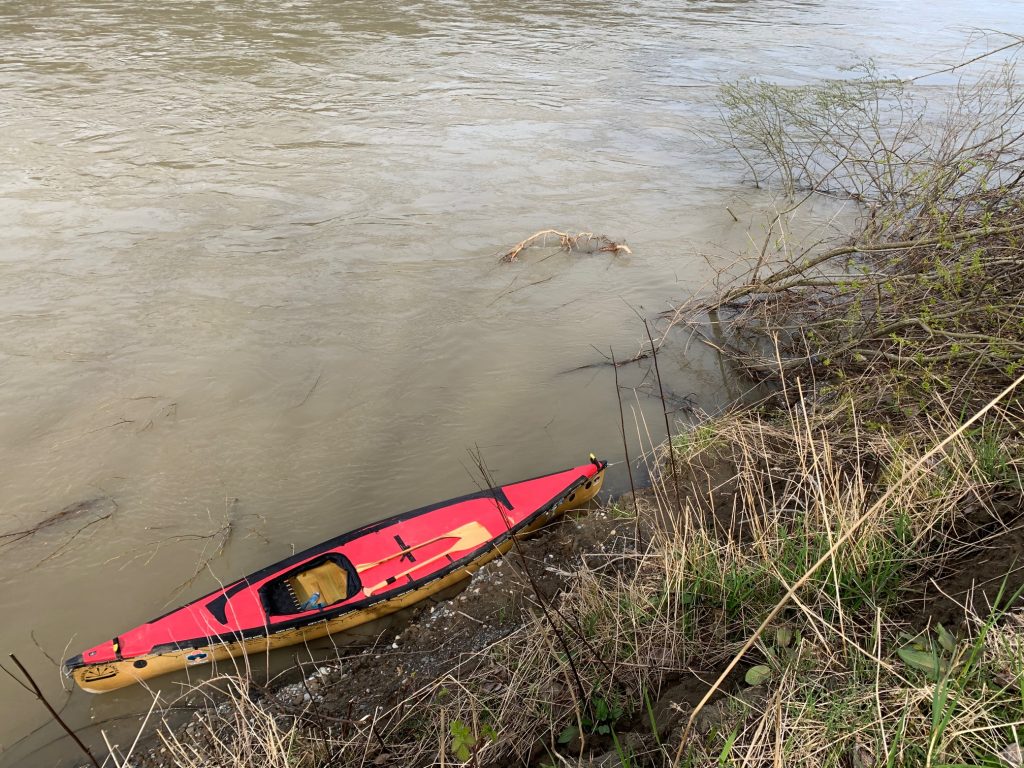 The view from the embankment says it all. End of the line, s*** out of luck, and not laughing out loud.

I tried four times to get through or around this brush pile. Each time I ended up entangled just enough to stop progress against the current. The entire width of the Fraser is visible here and the river is being squeezed between a mountain hard against the North shore and the collapsing bank I’m standing on.

The canoe is in a back eddy about 30 metres from where  I could go no further. I scouted upriver about 500 metres and there’s no way I can stem the current that is carving out great chunks of the bank.

There should be a beach here. At least that’s what  Google’s satellite pictures said should be here. Shoulda  coulda woulda.

If I get the canoe another 200 metres upriver, it might be possible to ferry across the river to the gravel bar just opposite. From where I am, any attempt at ferrying would mean missing the bar and being downstream for at least one km.

If it were life or death, I could try hauling the canoe up the embankment. I’ve got line, rings, and pulleys to do that. Besides a very low chance of pulling it off, it’s risky. In fact, I figure too risky. And, of course, it’s not life or death.

I have three options: Upstream, across stream, or downstream. Sadly, after my second scouting trip upriver on the embankment, I am reduced to retreating.

It takes me 15 minutes down river in what took me more than two hours up. With the Fraser higher than normal, the heavy rains of the last two days expected to increase flow and debris, and the harder parts of the river to come, it’s time for Plan C.

Plan C’s not so bad. It saves at least three days of hard if not impossible paddling and gets me to Hope in my hopes for 7 days.

It’s a bitter pill, but I am reminded that the first casualty of any battle is the plan. And at least it’s not the last resort, Plan 9 From Outer Space.