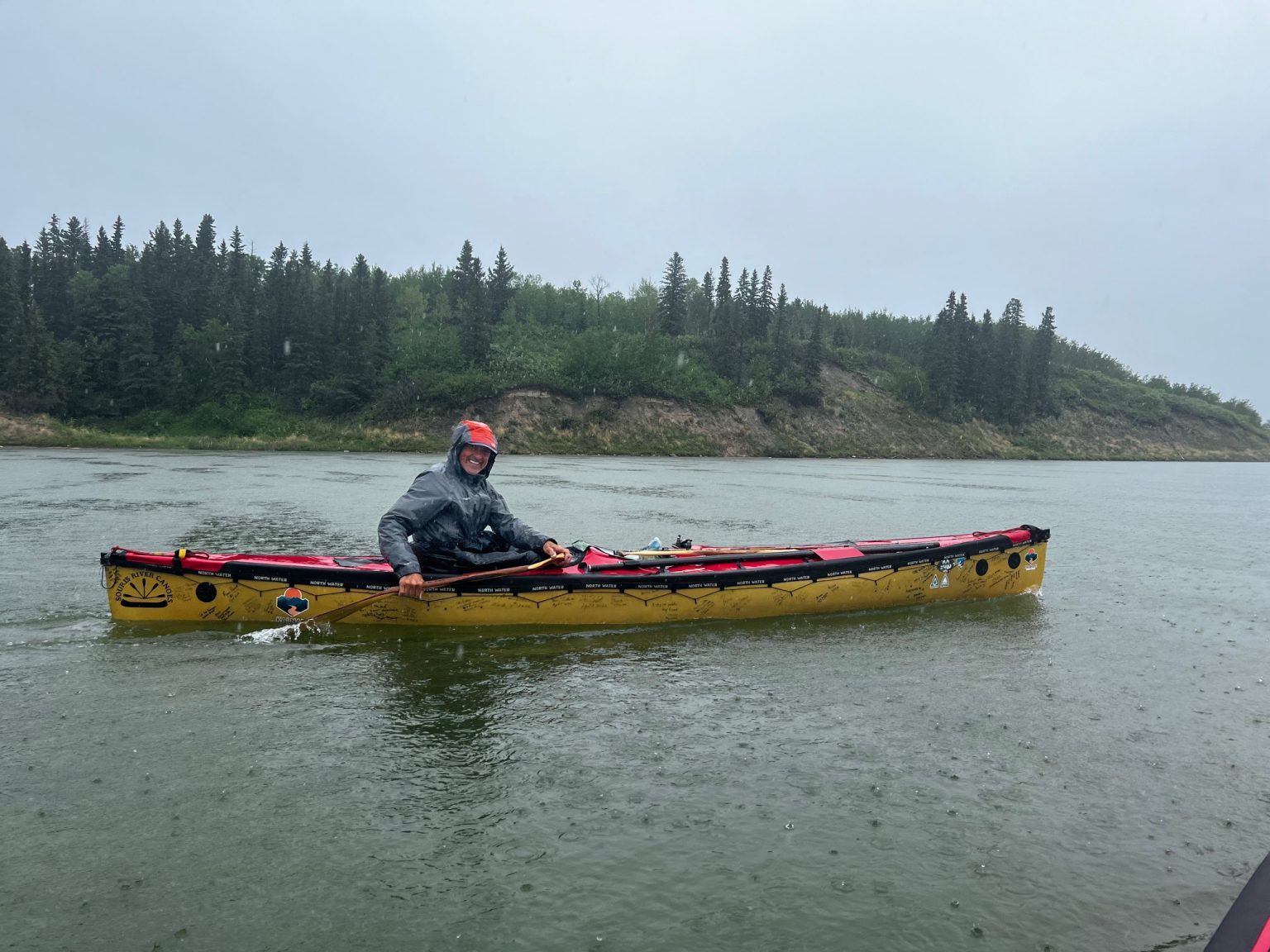 Forced off the river and onto a mudbank campsite the previous afternoon by thunderstorms, we figured ourselves geniuses for finding a campsite at all. And then it started to rain. Once the rain let it up it turned to a downpour and when the downpour finally let up, someone upstairs turned the tap on and it became a torrent.

What was simply mud before was quagmire by morning. A break in the clouds at 05:30 told us two things: 1) There was more rain coming; and 2) The quagmire was turning to soup and we had to leave. As in pronto. Like right now.

Honestly, I’m not good in mud. Especially soupy quagmires of duck-s*** slick river mud-bottom mud that doesn’t just stick, it permeates. I still have that sort of goo on and in my packs from Kinbasket.

I find profanity helps. You know, good old-fashioned cursing at everything your hands and feet land on. No holds barred sailor type swearing. The kind of language you would never, ever want your mother to hear. It takes your mind off the mud as you think of new ways to say the same old thing.

I didn’t stop swearing until we had paddled for half an hour. That’s how much mud there was.

As unlikely as it seems, I think I swore a little too much. Mother Nature must have heard my 90 minute record rant and decided it was time for a lesson. I’m guessing She figured a little rain would do the trick because no sooner had I run out of ways to curse out the mud on the bank that was now in, on, around, over, and under everything I owned (Including the bottom of the canoe where I could see gobs of the stuff somehow still attached to the hull through the thin Kevlar skin.), when the real rain started.

The smile in the picture is, well, somewhat forced. You know, the kind of small you get from a four year old who won’t put down his ice cream cone for the picture. Look closely and I bet you can tell I’m swearing behind clenched teeth.

It rained so hard that the canoes filled with water repeatedly despite the covers. It turns out the covers, and especially the cockpit skirts, are cleverly designed to funnel any water that lands on the canoe firstly through your clothing and then into the canoe. An engineering marvel if there ever was one.

Needing a place, any place, to get out,
we paddled up to Wapiti. A bit of flat grass looked promising so I pointed Kai Nani’s nose into a small bay and paddled for the bank.

The picture of me staring out the window,
faced pressed up against the glass, is where we ended up staying. The little
shed is actually a fish-cleaning station.

Stop for a moment and imagine what the smell of a regularly used fish-cleaning station that empties into an open sewer might smell like. Now, close the door and shutter the windows with Tyvek.

We slept on the wet, concrete floor either side of the cleaning table head and feet touching both ends. It was raining that hard. 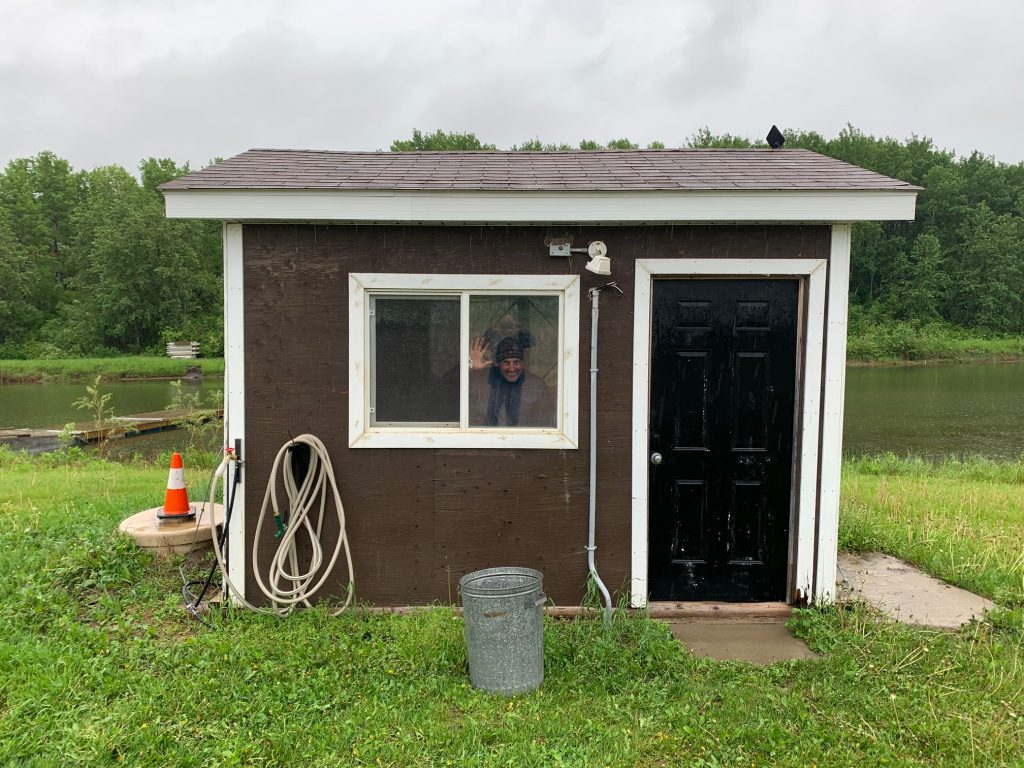 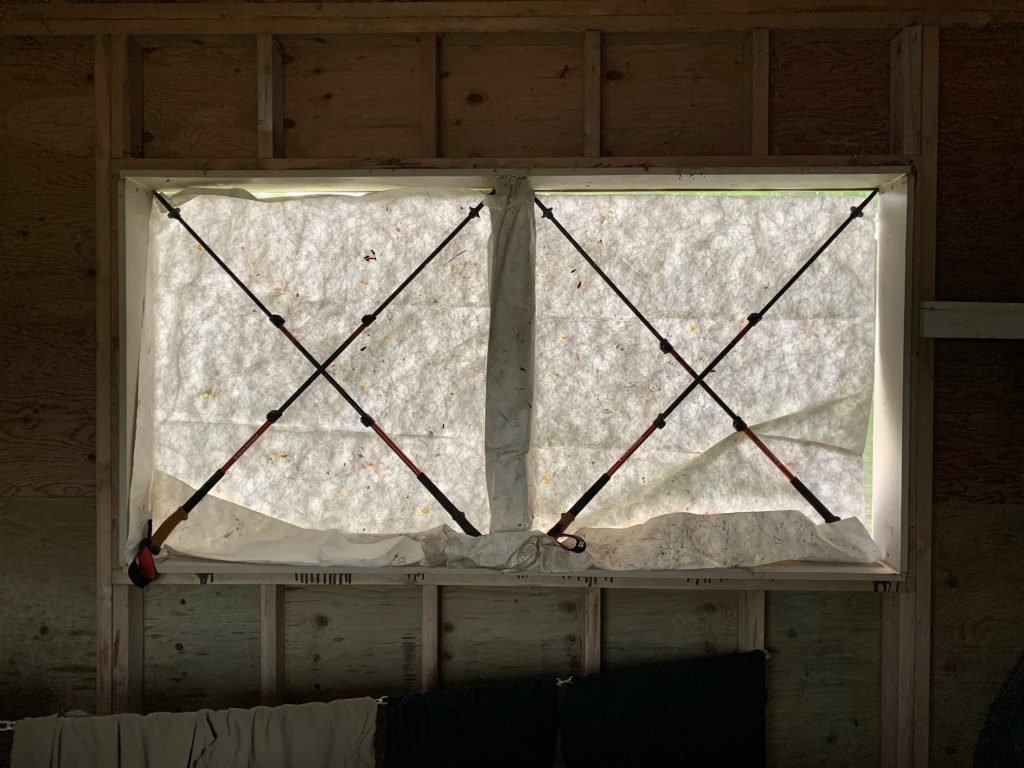