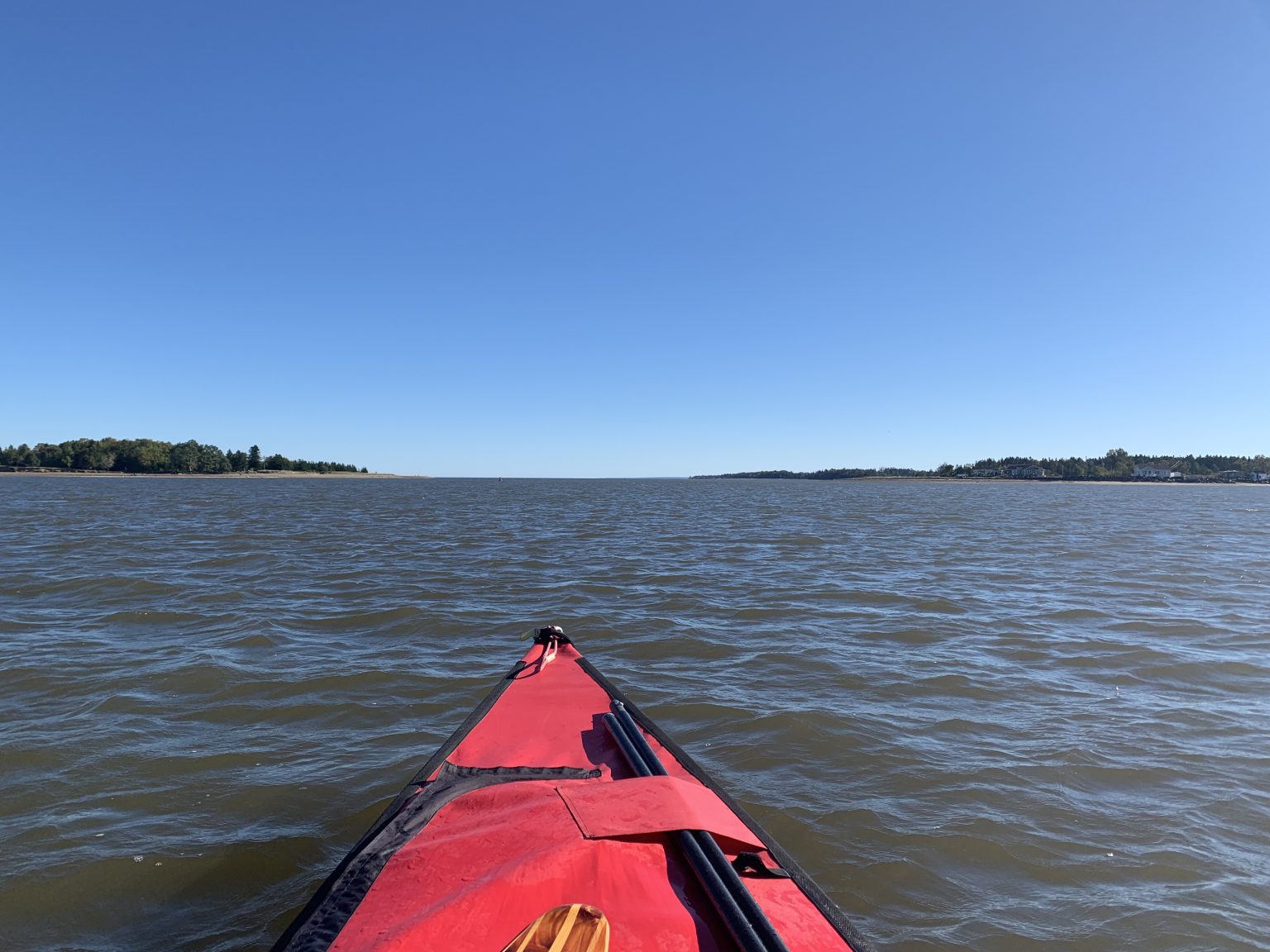 September 25, 2022
Fiona’s fury was being spent elsewhere and in her wake, I had one, perhaps two if I was lucky, decent days to get north. North meant clearing the Baie de Chaleur and getting amongst the islands and coves that protected Shippagan from firstly the Baie and secondly, the Atlantic. Trouble with the Atlantic would come
soon enough. Trouble with the Baie de Chaleur, however, was already here.

The picture above is Karta’s last kick at the can. Over the course of the last 6 months, I had gotten used to drawing my share of stares from passerby’s. Eating what was supposed  to be passing for breakfast in the hotel, the stares started early. Unsure what seemed to be drawing everyone’s attention, I smiled back, wondering what the looks would be if they really knew. Perhaps the paddling clothes, tattered, sun-streaked and weather-beaten as they were, or the way-to-big-for-carry-on pack at my feet was giving me away as an outlier. I couldn’t tell and didn’t care. Walking out of the hotel parking lot and onto Bathurst’s mainstreet would stamp an exclamation mark on it all if anyone cared to keep staring.

I wanted to be on the water and paddling out of the inlet that protects Bathurst from the Baie on a falling tide. I also did not want to cross the bridge that connected the north and south shores. No shoulder to walk while traversing bridges, overpasses, and construction zones had long since lost its appeal.

A following breeze and channel markers that served to keep me in water deep enough to paddle soon had me aiming squarely at the Baie proper. Thankfully, I would be headed east and protected by the shore from the building southerly breeze.

Ah, the best laid plans. Had the forecast been accurate, had I gotten away earlier, had some mysterious breeze not sprung up on some far away reach in the Baie, had Fiona not flung herself at the Maritimes, or perhaps of I had stayed at home in the first place, I would not have been paddling against the breeze with a nasty swell abeam of Kai Nani that slopped water continuously into the cockpit.

With a swell abeam, a canoe rolls independently of the paddling strokes, decoupling your lower and upper bodies. Paddling becomes inefficient as power transfer to the boat is no longer through firmly anchored feet via your core, but through the seat of your pants via your lower back.

The above is long-winded man-speak for pain in the ass paddling. As soon as I got into the open parts of the Baie, I knew I was in for it. Head-down, counting points in for it.

I snuck around the island in the middle distance above, careful to keep the canoe headed down the swell that had built during the afternoon and was now heaping up in the shallow separating the island from the mainland. I reached Pokeshaw Beach and River just before dark and just in time. I was wet,  cold, and famished.

I realized soon enough that I had also landed at  Pokeshaw Community Park. Picnic tables and firepits. Flat grass and gravel. Parking restrictions and no camping signs.

I ignored the latter, huddling away far removed from the beach hoping not to offend or be rousted out of the tent by an overzealous mall cop. The rain that started soon after I took this picture helped.

Tomorrow would have much to say about when I would actually finish. Finish. Imagine that. 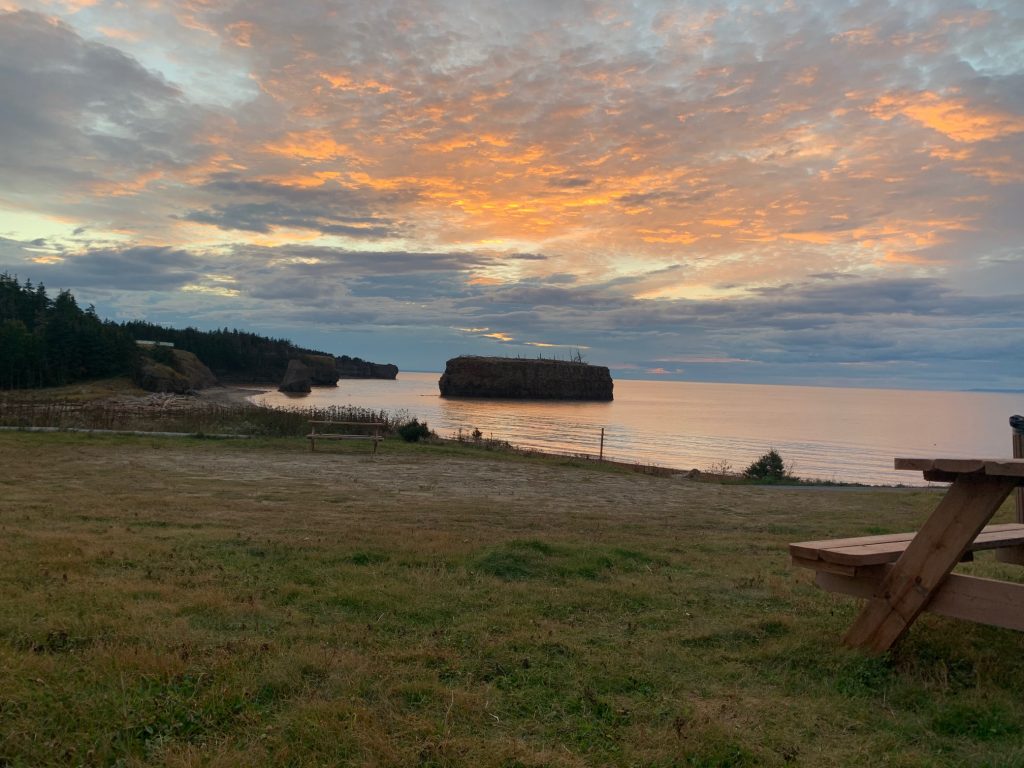 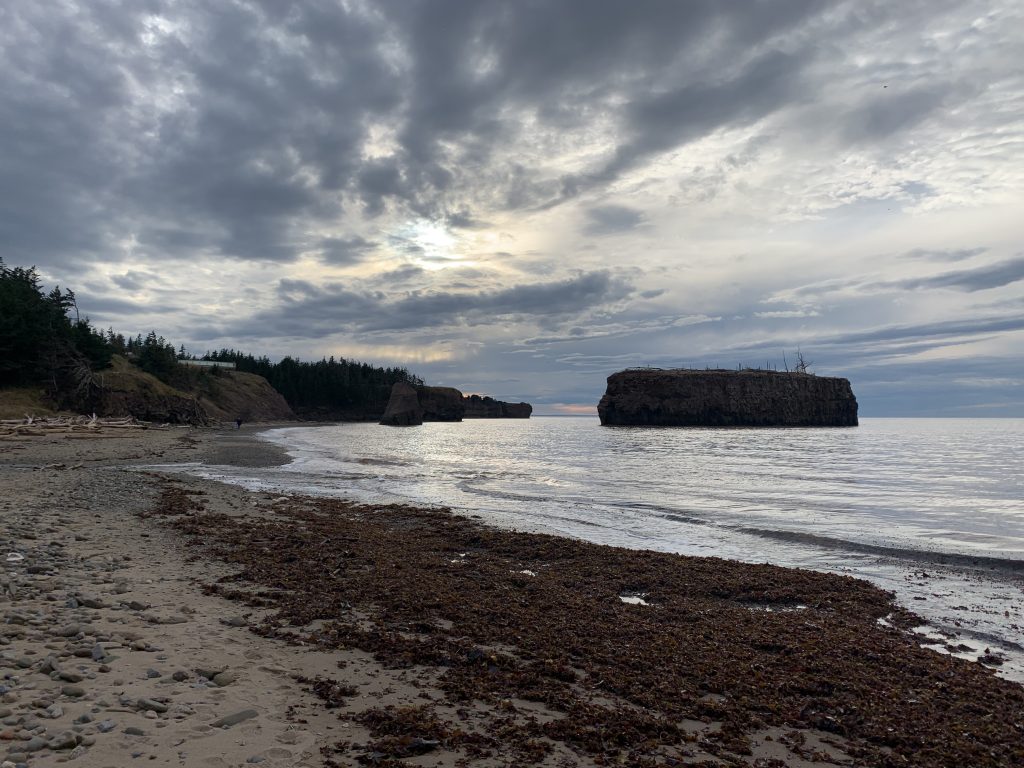 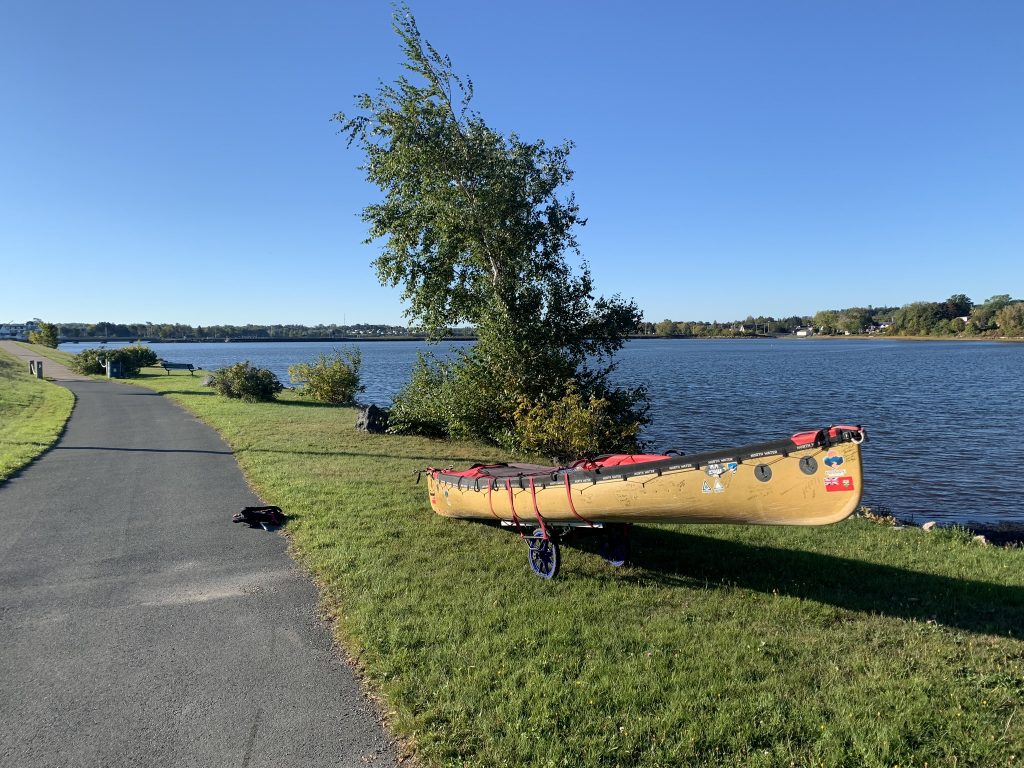