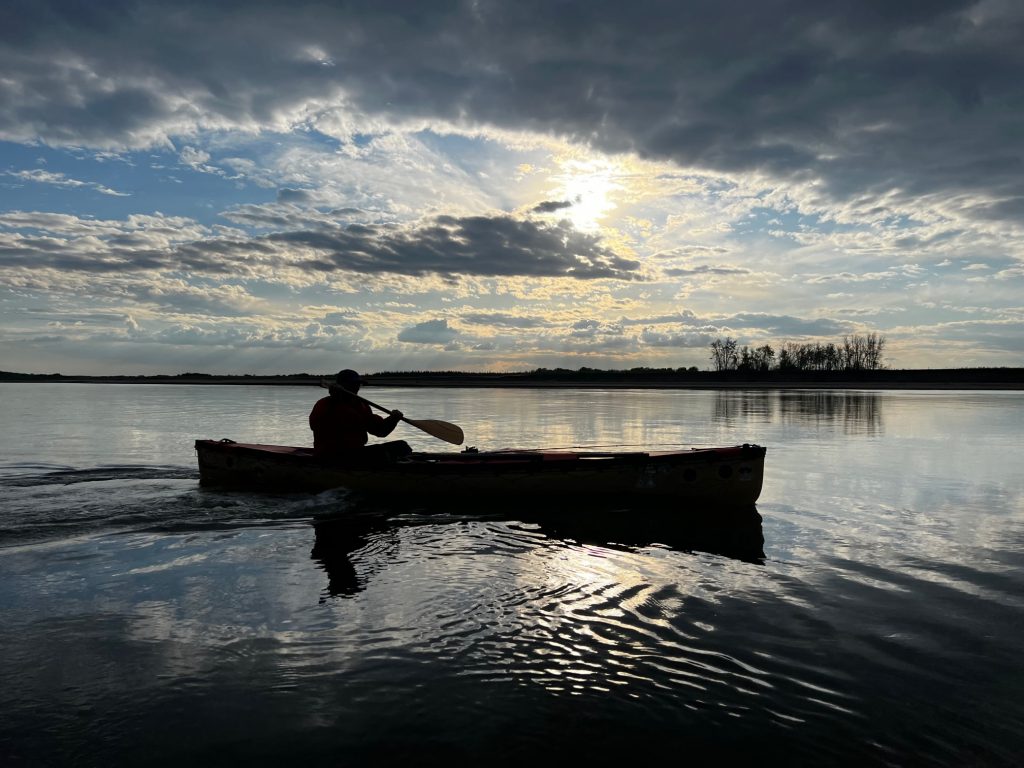 Leaving Cecil Ferry, I figured a bit of a push would land us in Prince Albert in a day. We set our sights on Peter Pond Point, put our heads down, and put in the first of what would be 10,000+ strokes.

Yup. 10,000 plus. Actually, that number is an underestimate but anything bigger would have you calling me a lier or worse.

At the leisurely pace of 1 stroke every 2 seconds (30 per minute), that’s 10,300 strokes per day. Most days we are way over despite Jan’s no portage and 10,000 stroke per day contract. If there’s any wind at all, we are paddling at 60-80 strokes per minute. And if you’re pushing for PA, 6 hours of is will only get you two-thirds of the way.

I was surprised to find a place on the map named after Peter Pond. More than that, the aforementioned point sits adjacent to the Peter Pond Historical Site.

Pond was an American, a murderer, and a scoundrel. He was also an enterprising fur-trader who never let the truth stand in the way of profits or a partner in what Pond figured to be his fair share. Even by 18th century standards he had some serious character flaws.

Thompson’s, MacKenzie’s, and Fidler’s journals are riddled with references to Pond. By all accounts, he was nest avoided lest he fly into an uncontrollable rage provoked by who knows what. More than that, his lies actually provoked the likes of Captains James Cook and George Vancouver into long rants recorded in their respective ship’s logs and journals.

It was the enterprising, independent Pond who left Fort Sturgeon near the point that now bears his name bound for the fur-rich Athabaska region. He returned a year or so later with enough pelts to make him one of the richest men in North America and, and as far as he was concerned, a license to lie, cheat, and steal not to mention kill. The discovery of the incredibly lucrative Athabaska region and Pond’s no-holds barred promotion led directly to the formation of the Northwest Company and a never-ending field with the Hudson’s Bay Company.

The worst of his transgressions, however innocuous it may seem, was a map. Pond’s map was mostly a figment of his imagination. What he imagined was the Holy Grail of 18th century exploration in North America. Pond’s map showed a clear path to the Pacific. Pond drew in the fabled northwest passage.

Cook’s 1776 voyage was a tasking by the British Admiralty to find the western extremity of Pond’s passage. He  sailed above 70 degrees North and was only turned back by solid pack ice just west of Point Barrow. Cook did, however, label a portion of his chart of what we know as Cook Inlet as a river mouth. Weather, time, and orders prevented anything more than a cursory examination of the inlet thus fueling further speculation

Mackenzie’s 1791 expedition down the river that now bears his name was an effort to find the northwest passage that Pond had mapped. Mackenzie cursed the man for his fabrications and the hardships it caused.

Vancouver was dispatched by the Admiralty in 1791 to map the entire west coast of North America from Baja California to Cook Inlet thereby separating fact from fiction. Vancouver’s expedition,
the longest of any in the Age Of Discovery, covered more than 65,000
nautical miles, 10,000 of which were undertaken in open boats, resulted in a chart of the west coast of North America that was not equaled for close to a century and a half. Vancouver also put the proverbial nail in Pond’s fabricated map and imagined passage.

Nearing dark, we arrived at a muddy beach at the end of a foot path that led to a parking lot. We only found it because there was a couple fishing there. He was after sturgeon and she was bundled up, snug in a lawn chair perched on some rocks. Close on our heels was a beaver apparently used to canoes arriving at all hours. I heard a giggle as the young women pointed to the creature that fuelled so much of Canada’s history and say to her husband ‘Look a beaver! The Cree word for beaver is amiss!’.

My clock instantly flipped back centuries and I imagined those same words made Pond stop in his tracks, turn and stare as well.