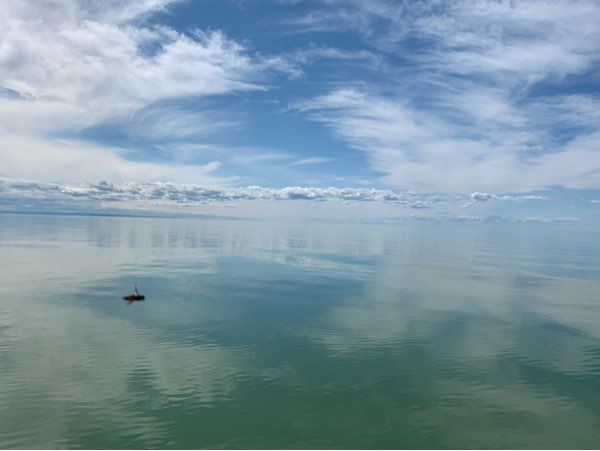 We all have bad days. Some, of course, worse than others. Some are epic. The stuff of legend.

The bad days do not matter. They are for re-telling  at  birthday parties and barbecues. The good days are the ones that truly count. And any good day can easily become a best.

What you do on your good days speaks directly to your character. It says something of your attachment to the rest of humanity and a window to the soul.

To make my point, think of Mother Theresa. Her good days were spent in the slums of Calcutta turning other poor souls bad days into perhaps their best.

Much closer to home, and to the point of Part 4, my rather bad day  was made one of my best by the kindness of strangers who saw me suffering on the road.

Ken and Eric on their way to change out a pressure washer in The Pas chose to stop and ask if they could put the canoe in the bed of their truck. They gave me directions to Oscar’s
Point where, mercifully, I found Lake Winnipegosis. They returned hours later after work to check up on me and, get this, two beers. They figured I could use them.

And Jimmy along with two others who turned their truck around, again asking if they could load the canoe on it, and take me to the lake.Asking if I needed anything, they offered bottled water, a string of bananas (I took 2), and a vial of traditional native medicine for aches and pain. Jimmy returned hours later with a case of water and granola bars. He too was wondering how I was doing.

The list of other people on this trip who have made my days better is as long as my arm. Bailey, Jo-Ann, Greg, Gord and Janet, Paul, Jack, Allan, Mom, Solomon, Renee, and Michala to name a handful from the top of my head.

The best part of any adventure, big or small, are the people you meet. i have met the most extraordinary, kind, generous, and compassionate people in some of the most remote parts of the world. They all had better things to do than taking the time to speak with me. But they did and in every instance, they made my day better.

So, the choice is yours. On your good days, when you have the where with all to make choices, whose day will you make better? Perhaps some  small seemingly inconsequential act of kindness will turn someone else’s bad day into one of their best.

Bad days are not character builders. Good days are. When the going gets tough, the good get going. They come out of the woodwork in the most unexpected places. Like Oscar’s Point.