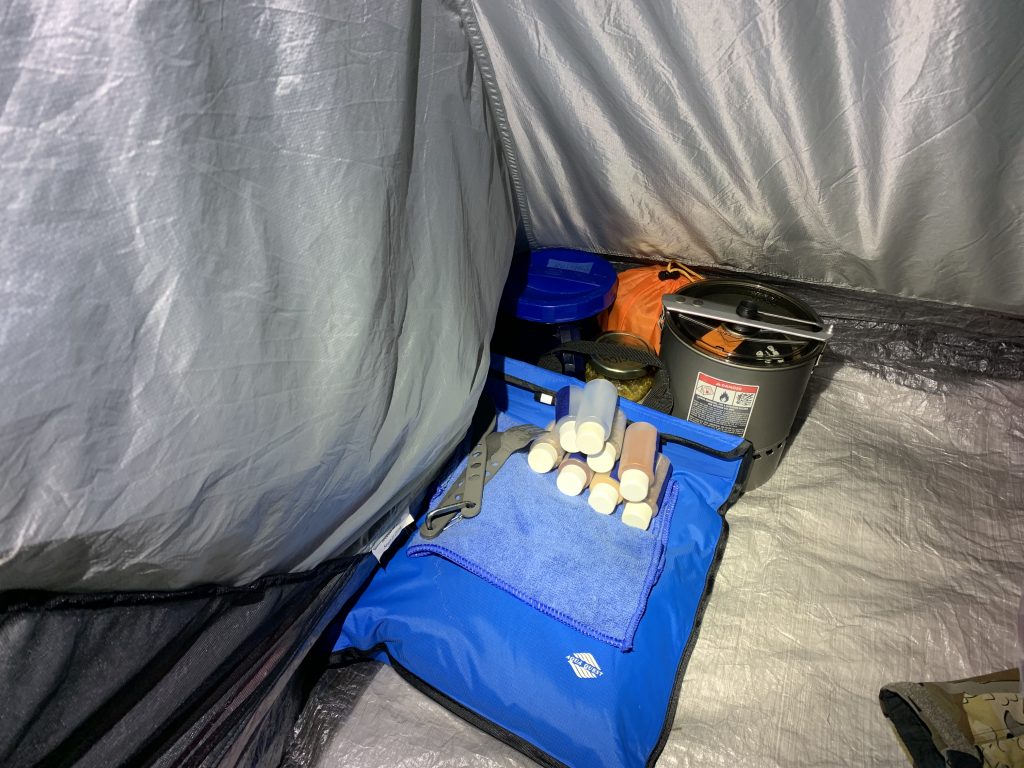 Minus the tiny wood burning stove, this is the sum total of my kitchen. Plus spice rack. Heaven forbid one were to leave home without a spice or rack.

It’s it much to look at,  but truer things have not been said than the joy of a hot meal after a trying day. Trying in the sense of paddling upstream, against the tide, river currents, and wind all the while getting rained on. The saving grace was finding a spot to spend the night nicely tucked up between a barb-wire fence and a highway on-ramp.

It was an ignominious end to an humble start. I spent the better part of a half hour going mostly going backwards. Not even the shore team could bear to watch as I thrashed uselessly against the River. An ever so slight change in tide allowed me to finally get around past Gilbert Beach and in my way.

By 6pm the breakfast sandwich I  ate 12 hours earlier had long since served its purpose. Out of gas, I was anxious to get ashore, get settled, and get to bed.  Before bed, however, would come dinner. Pasta, pesto, and a dash of bacon. Sadly,  no mayonnaise. Truer things indeed.

It’s not lost on many that the 1 April is April Fool’s Day. April Fools indeed. What better day to start a hair-brained, next to impossible solo, canoe/portage trek across nearly 7500 km of lakes, rivers, mountains, and highway. Yes, I’ll be dragging the canoe behind me as I hike down Highway #1, The Trans-Canada Highway.

Be all that as it may, I will depart Gilbert Beach near Steveston BC on the South Arm of the Fraser River on April Fool’s Day. On a fool’s errand no less. But what is living if not one long, never-ending stream of departures? Getting out the door, the actual departing, is more often than not the most daunting if not difficult part of every adventure. I am swamped with last minute preparations and buried under a mountain of minuetia. It seems I’ll never be ready let alone prepared. The calendar, boldly proclaiming April Fool’s Day, is a merciless reminder that departure is not only imminent, but inevitable.

I have a thousand questions that cannot and will not answered until I step into the canoe and take those first few paddle strokes away from the beach. I wish I could say I was unafraid, but I cannot. I can say, afraid or not, that I will try.